I find some new European texts about the Symbol of heart 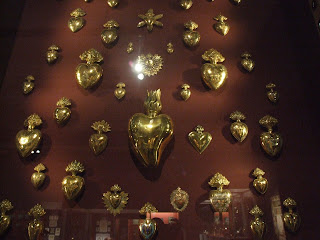 " so the heart is the sun of Microcosm,even as the sun deserves to be called the heart of the world, for it's the heart by whose virtue and is preserved from corruption and coagulation, it is the household divinity which, discharging its function, nourishes, cherishes, quickens the whole body, and is indeed the Foundation of life, the source of all action." ( William Harvey)

So, in my Opinion The last text speaks about the Catholic idea against the Protestant force ( because of the appearing century, and the Christian connections) But I also can find an " internal truth" behind that curtains.
Bejegyezte: Őry Annamária dátum: 13:39 Nincsenek megjegyzések:

Őry Annamária
I graduated at the Academy of Fine Arts in Budapest as a painter at 2006. I work in oil and pastel, also creating ink drawings and watercolours. My main point of interest is in the intrinsic potentialities of particular techniques. While investigating these I focuses on a subject matter or a genre. The use of a particular technique is usually connected with a corresponding line of thought, thus the analysis of the pictorial problem gives birth to a series of paintings revolving around the same subject matter. I have received several scholarships,of which one of the most important was the one in 2009 by the Hungarian Academy in Rome. My major exhibitions of the past period took place in the Hungarian Cultural Institute in Prague (2009) Hungarian Academy in Rome (2009) MODEM Debrecen, Hungary (2010) Hang Bai exhibition space Hanoi, Vietnam (2010) Hungarian Cultural Centre Brussels (2010), European Parliament Brussels (2010) Symbol art gallery Budapest, Hungary (2012) Gallery Neon Budapest Hungary (2013) Hungarian Cultural Institute Sofia , Bulgaria (2013) Timegarden CHB Berlin, Germany (2013)